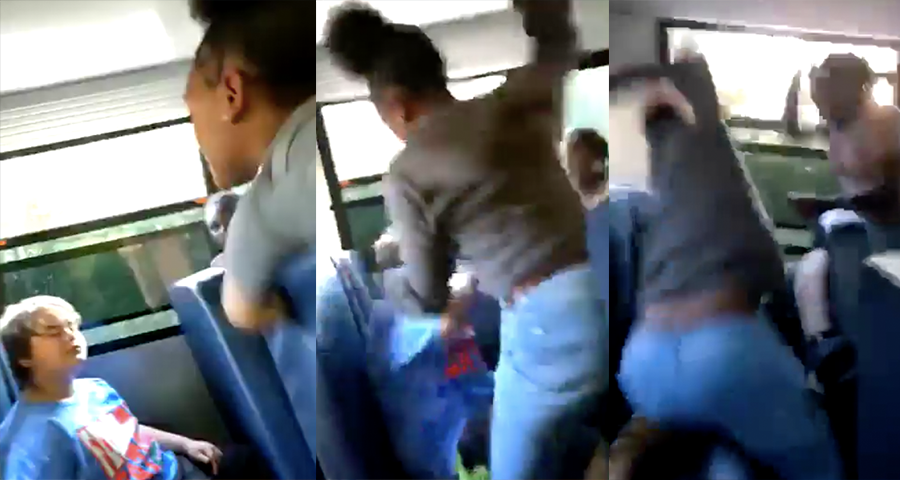 The video below shows a 14-year old Florida kid being attacked by other students on a school bus for wearing a Trump hat to school.

“He was proud to wear it,” she tweeted. “He wore it to school, but due to immediate bullying he put it away & didn’t wear it to school again, sadly the damage was already done & was now a target.”

The teen was then “steadily” bullied on the bus, getting “tripped” and verbally abused before the situation culminated in the beatdown that required a trip to the hospital, his mother claimed.

“The nurse noted there are bruises on his arm that were older along with his new injuries,” the boy’s mother tweeted last month. “He didn’t tell us about the bullying, but they took it to a new level yesterday and we are just now learning what he was going through.”

Attorney Foye Walker, who is representing the boy, said the attack occurred on a Hamilton County school bus and remains under investigation.

“Tyler wore a Trump hat to school two weeks prior to the beating,” Walker wrote The Post in an email. “It started and/or increased a series of bullying that culminated in his assault and batter … His beating appears to be the result of his support for President Trump.”

US Has Top Rate Of Single Mothers In The World

Best View i have ever seen !

Wow! This blog looks exactly like my old one! It’s on a completely different topic but it has pretty much the same page layout and design. Outstanding choice of colors!

In fact when someone doesn’t understand afterward its up to other viewers that they will assist,
so here it occurs.

It’s really very complex in this busy life to listen news on Television, thus I only use internet
for that reason, and obtain the most up-to-date news.

I read this article fully regarding the difference of hottest and previous technologies, it’s amazing article.

I do agree with all the ideas you have offered to your post.
They’re really convincing and will certainly work. Still,
the posts are too brief for novices. May you please prolong
them a little from subsequent time? Thanks for
the post.

This is the perfect webpage for anybody who hopes to find out about this topic.
You understand so much its almost tough to argue with you (not that I really will need
to…HaHa). You certainly put a new spin on a topic which has been written about for ages.

Thank you a bunch for sharing this with all folks you really understand what you
are talking about! Bookmarked. Kindly additionally seek advice from
my site =). We may have a link alternate contract
among us

Heya i am for the first time here. I found this board and I
in finding It really useful & it helped me out a lot. I
am hoping to provide one thing back and help others such as you aided me.

What’s up to every body, it’s my first pay a quick visit of this blog; this blog consists of
awesome and really fine stuff in support of visitors.

Wonderful post however , I was wanting to know if you could write a
litte more on this subject? I’d be very grateful if you could elaborate
a little bit further. Cheers!

Excellent pieces. Keep posting such kind of info on your site.
Im really impressed by your blog.
Hello there, You’ve performed a great job. I will certainly digg it and individually
suggest to my friends. I am confident they will be benefited from this website.

This article offers clear idea designed for
the new people of blogging, that truly how to do blogging and site-building.

This site was… how do you say it? Relevant!! Finally
I’ve found something that helped me. Kudos!

Hi to every body, it’s my first visit of this weblog; this website consists of amazing and in fact good material in favor
of readers.

Everyone loves it when people come together and share opinions.
Great blog, continue the good work!

Wow, incredible blog structure! How lengthy have you ever been blogging for?
you made blogging glance easy. The full glance of your website is wonderful, let alone the content!

Hiya very cool website!! Guy .. Excellent .. Superb ..
I’ll bookmark your web site and take the feeds also?
I’m glad to find numerous helpful info here in the submit, we’d like work out more
strategies in this regard, thank you for sharing.

I always used to read post in news papers but now as I am a user of web thus from
now I am using net for articles or reviews, thanks to web.

As the admin of this web site is working, no
uncertainty very soon it will be renowned, due
to its quality contents.

Hi there very cool web site!! Guy .. Excellent ..
Wonderful .. I will bookmark your website and take the feeds also?
I’m happy to search out so many useful info here within the
publish, we’d like develop extra strategies on this regard,
thank you for sharing. . . . . .

Please let me know if you’re looking for a article author for
your site. You have some really great articles and I
think I would be a good asset. If you ever
want to take some of the load off, I’d really like to write some content for
your blog in exchange for a link back to mine.

Please send me an email if interested. Many thanks!

Good day! I just would like to offer you a big thumbs up for the excellent information you’ve got here on this post.
I will be coming back to your site for more soon.

Hi, I do think this is an excellent web site. I stumbledupon it
😉 I am going to revisit once again since I book-marked it.

Money and freedom is the greatest way to change, may you be rich and continue to
help others.

Have you ever thought about creating an ebook or guest authoring on other blogs?
I have a blog based on the same topics you discuss
and would love to have you share some stories/information. I know my readers would enjoy
your work. If you are even remotely interested, feel
free to send me an email.

Heya i’m for the first time here. I came across this
board and I find It truly useful & it helped me out a lot.

I hope to give something back and aid others like you helped me.

Excellent web site. Plenty of useful info here. I’m sending it to some friends ans also sharing
in delicious. And of course, thanks on your effort!

No matter if some one searches for his necessary thing, so he/she desires to be available that in detail, therefore
that thing is maintained over here.

Simply wish to say your article is as surprising. The clearness for your post is just
excellent and that i can assume you are a professional on this subject.
Well with your permission allow me to grab your RSS
feed to stay updated with forthcoming post.
Thanks a million and please keep up the rewarding work.

Please let me know if you’re looking for a article writer for your blog.

You have some really great posts and I think I would be
a good asset. If you ever want to take some of the load off, I’d absolutely love to write some articles for your blog in exchange for a link back
to mine. Please send me an email if interested.
Thanks!

Can I just say what a relief to discover an individual who really understands what they’re discussing
on the internet. You certainly understand how to bring a problem to light and
make it important. A lot more people need to look at this and understand
this side of your story. It’s surprising you are not more popular because you most certainly have the gift.

I am not sure where you’re getting your info, but great topic.
I needs to spend some time learning much more or understanding more.

Thanks for great info I was looking for this info for my mission.

Hi there, You’ve done an excellent job. I will definitely digg
it and personally recommend to my friends. I’m sure they
will be benefited from this site.

I love your blog.. very nice colors & theme. Did you
make this website yourself or did you hire someone to do it for you?
Plz answer back as I’m looking to construct my own blog and
would like to know where u got this from. thank you

Nice answers in return of this matter with genuine arguments and telling the whole thing on the topic of
that.

constantly i used to read smaller posts which also clear
their motive, and that is also happening with this post which I am reading at this place.

Great blog you’ve got here.. It’s hard to find high-quality writing like yours these days.
I truly appreciate people like you! Take care!!

Great site you have got here.. It’s difficult to find quality
writing like yours nowadays. I seriously appreciate people like you!
Take care!!

A person necessarily assist to make critically posts I might state.
This is the very first time I frequented your web page and
thus far? I surprised with the analysis you made to create this particular publish amazing.
Magnificent process!

Hi there, I discovered your web site by means of Google at the same
time as searching for a comparable matter, your website got
here up, it seems good. I have bookmarked it in my google bookmarks.

Hi there, simply was aware of your weblog thru Google, and found that
it’s really informative. I am gonna watch out for brussels.
I will be grateful in case you proceed this in future.
Many other people shall be benefited from your writing.

It is the best time to make some plans for the future and it
is time to be happy. I have read this post and if I could I desire to suggest you some interesting things or suggestions.
Perhaps you can write next articles referring to this article.
I wish to read even more things about it!

Amazing blog! Do you have any recommendations for aspiring writers?
I’m hoping to start my own blog soon but I’m a little lost on everything.
Would you recommend starting with a free platform like WordPress or go for a paid option? There
are so many choices out there that I’m totally overwhelmed ..

I don’t even know how I ended up here, but I thought this post was good.

I do not know who you are but definitely you are going to a famous blogger if you aren’t
already 😉 Cheers!

Thanks for sharing your thoughts on sea moss. Regards

This is a good tip especially to those new to the blogosphere.
Simple but very accurate info… Many thanks for sharing this one.
A must read article!

Wow, fantastic blog layout! How long have you been blogging for?
you make blogging look easy. The overall look of your
web site is great, let alone the content!

I like the valuable info you supply to your articles. I’ll bookmark
your blog and check once more here frequently. I am reasonably sure I will be informed a lot of new stuff
proper right here! Best of luck for the following!

Whats up very cool blog!! Man .. Beautiful .. Amazing ..
I will bookmark your site and take the feeds also? I’m glad to
seek out numerous useful information right here in the submit, we need work out more techniques in this regard, thank you for
sharing. . . . . .