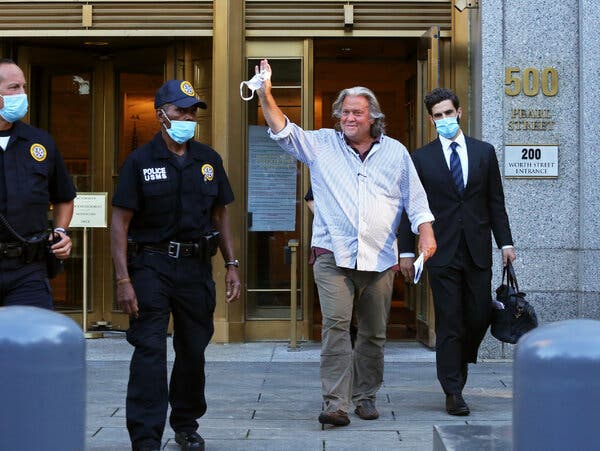 On Friday Steve Bannon declared he would not back down after the Southern District of New York indicted him on charges of wire fraud and money laundering related to his involvement with Build the Wall nonprofit.

He spoke on his podcast The War Room Pandemic declaring, “This fiasco is a total political hit-job. The timing is exquisite” in the run-up to the election, said Bannon, adding “I think it is probably the most important election of our time because the stakes now are so high.”

“I’m not gonna back down,” Bannon added. “Everybody knows I love a fight. I was called a honey-badger for many years. I’m in this for the long-haul. I’m in this for the fight. I’m going to continue to fight. This was to stop and intimidate people that want to talk about the wall. This is to stop and intimidate people that have President Trump’s back on building the wall,” he said.

“One thing I can tell you from the heroic effort we did and really, Brian Kolfage – who’s an American Hero. Brian Kolfage is, I think the most wounded airman in the history of the Air Force, to survive. He’s a triple-amputee. Almost bled out multiple times after he was hit during the Afghan and Iraq war. And just an American hero. The pain and nagging that guy still goes through every day – he has dedicated his life, he had this idea, he has dedicated his life to building this wall.” -Steve Bannon

The southern district of New York has a long history of what appears to be politicized law enforcement with recent attacks on the NRA, Trump’s tax records, The Build The Wall nonprofit, and that tells you a lot about these indictments.

“I would shut it down. I would listen to the scientists” -Joe Biden