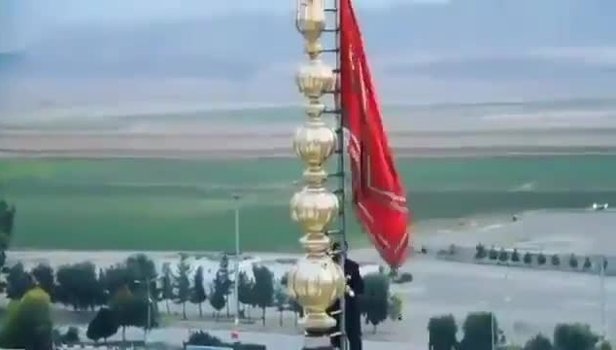 For the first time in the history of Iran, the red flag has been hoisted over the dome of Jamkaran Mosque which means IRAN has traditionally announced a war. This matter has gotten very serious now.

The war flag reads the words: “Those who want to avenge the blood of Hussein.”

The flag, inscribed with the words “Those who want to avenge the blood of Hussein,” was hoisted above the mosque’s shrine for what local reports claimed was the first time in history, according to the Daily Mail.

The grandson of Muhammad, Hussein was decapitated in A.D. 680 during the Second Islamic Civil War, when Muslims were fighting over who was the proper successor to their prophet. The act was met with bloody retaliation from Muslims who considered Hussein’s death unjust and sought to avenge him.