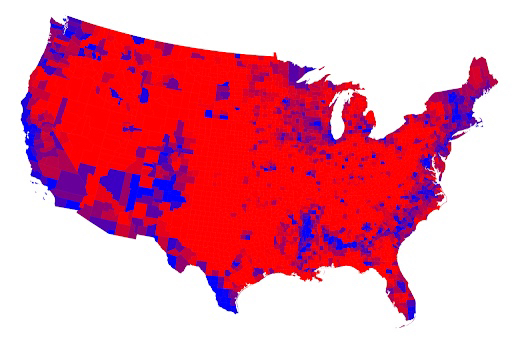 There’s been growing chatter online about the divided states of America with Joe Biden and the democrats involved in outright theft of the presidential election. It’s been a contentious issue with both sides clearly welcoming the idea of two separate nations with one for the left and one for the right.

As the mainstream media has shifted further and further away from the truth and fairness and people on the right have had to seek alternative news sources, right and left have increasingly seen the world not with differing opinions, but differing facts.

On Wednesday Rush Limbaugh said on his radio show, “I actually think that we’re trending toward secession. I see more and more people asking what in the world do we have in common with the people who live in, say, New York? What is there that makes us believe that there is enough of us there to even have a chance at winning New York? Especially if you’re talking about votes.”

The discussion has heated up as 19 states have now joined the Texas law suit at the Supreme Court to declare that the presidential elections as held (and as directed by government officials outside the legislature) in Pennsylvania, Georgia, Wisconsin, and Michigan all flagrantly violated their own election laws by materially weakening or doing away with security measures.

Amy Siskind on Twitter said, “NY and CA are sick of supporting these red welfare states!”

Here is the Clinton Archipelago and Trumpland.

If we could divide the country by county lines this is what it would like like, making the red nation mostly contiguous while the blue counties are mostly divided.

The obvious division is Blue Cities and Red States, how that’s resolved is anyone’s guess.

What We Know About Covid-19 and the Vaccine