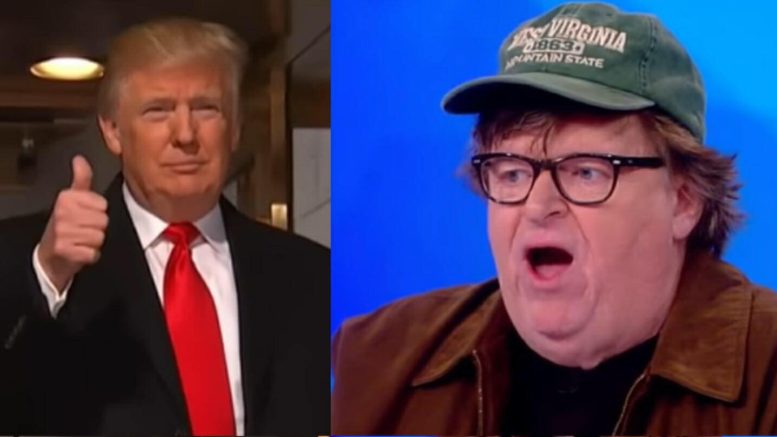 Michael Moore, the radical leftist filmmaker told the audience on Democracy Now that Trump would win re-election if the vote was held today because of his support in the heartland, ” his level of support has not gone down one inch,”

“I think if the election were held today,” Moore said of a Trump victory. “Hillary won by 3 million popular votes. I believe whoever the Democrat is next year is going to win by 4 to 5 million popular votes. There’s no question in my mind that people who stayed home, who sat on the bench, they’re going to pour out, in California, New York and — you know, but also in Texas and whatever, I mean, places that Trump will probably win, but, yeah, there’s going to be a much higher percentage of people voting against him.”

“The problem is, if the vote were today, I believe, he would win the electoral states that he would need, because, living out there, I will tell you, his level of support has not gone down one inch,” he said. “In fact, I’d say it’s even more rabid than it was before, because they’re afraid now. They’re afraid he could lose, because they watched his behavior. So they are voracious in their appetite for Donald Trump. That’s the bad news.”

“What we have to do is we have to make sure we don’t give them another Hillary Clinton to vote for,” he said. “The Democrats who are encouraging moderation, go to the center — you know, ‘Let’s not upset the angry white guys’ — that’s really what it is.”

“Ninety thousand wanted to send a message to the Democratic Party: “You forgot us a long time ago out here, and we will not put up with this anymore. We’re not going to vote for Trump, but we’re not going to tolerate you sending us another Republican-lite Democrat,'” Moore said.

“If we go that route, it’s guaranteed we will lose the Electoral College,” Moore continued. “We will win when we put somebody on that ballot that excites the base — women, people of color, young people. When they wake up that morning and they feel the way that many of us, many of you watching, felt the morning that you were going to — in 2008, and you were going to get to go and vote for Barack Obama.”

Christians Brutally Murdered By ISIS In Nigeria This Christmas