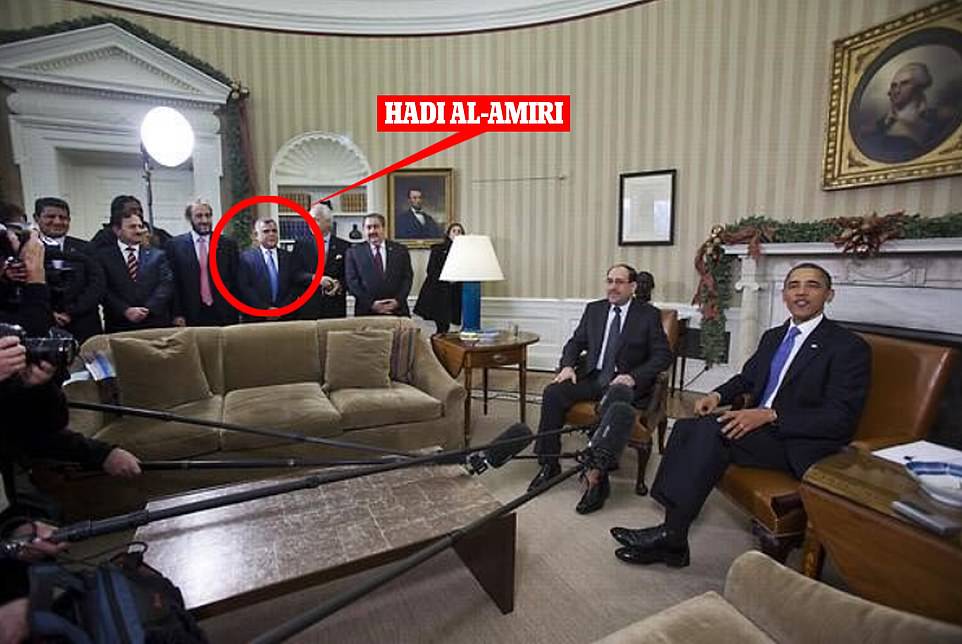 In 2011 President Obama had Hadi al-Amiri as a guest at the White House as part of a delegation from Iraq.

On Tuesday during the raid of the US Embassy in Iraq al-Amiri was seen in photographs as leading the attack.

While American treasure and blood are spent in Iraq to provide them security and prosperity their politicians and leaders are literally attacking our troops. Time to get out of Iraq, Afghanistan, and the middle east.

The ease with which Amiri and these other commanders breezed through the heavily fortified ‘Green Zone’ has alarmed US officials, who have noted their militia’s increased presence around diplomatic buildings in recent weeks.

A former guerrilla fighter who fought for Tehran in the Iran-Iraq War, Amiri has been accused of terrorism against the US, of helping Iran to ship arms to Bashar al-Assad in Syria and has been pictured bowing before the Islamic Republic’s Supreme Leader Ayatollah Ali Khamenei.

As Commander of the Badr Corps, an Iranian vassal within the PMF, Amiri’s men helped the US in their fight against ISIS in 2014 and 2015. But a recent spate of missile attacks by the Kataeb Hezbollah branch of the PMF, climaxing last Friday with the death of an American contractor at US base north of Baghdad, has revealed that Washington’s friends in the region can soon become enemies.

President Donald Trump ordered USAF jets to decimate Kataeb Hezbollah bases and 25 were killed on Sunday night. Amiri joined thousands who flocked to funerals for the fighters in the Iraqi capital on Tuesday and then spearheaded the crowds who rushed through the Green Zone and breached the US embassy.

The 65-year-old, who was of ‘grave concern’ to lawmakers as Obama’s guest in 2011, stood at the forefront of riots which prompted Donald Trump to deploy 750 Army paratroopers on Wednesday, with another 4,000 on standby.

Iraqi’s Storm US Embassy In Baghdad