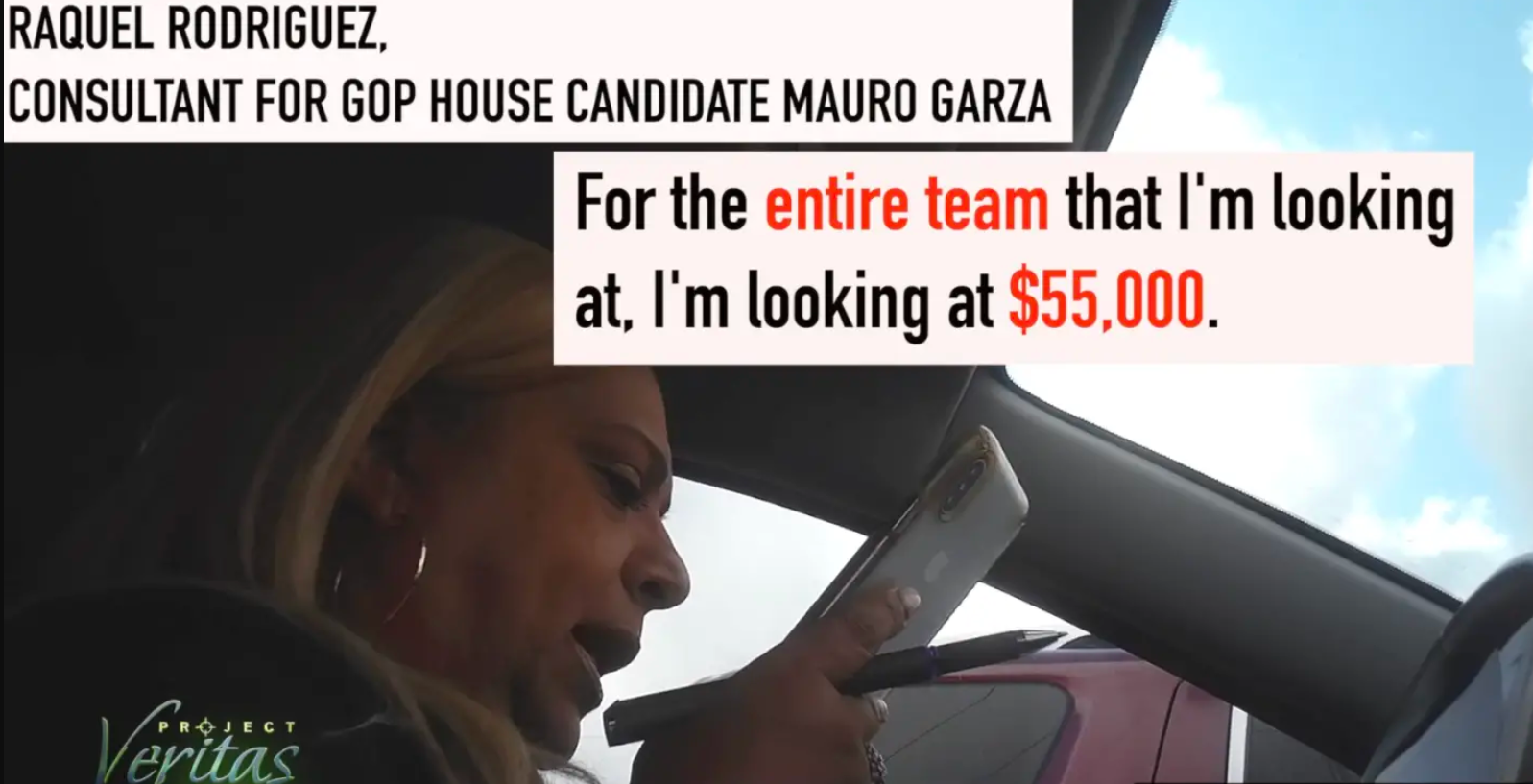 In what appears to be a massive voter fraud scheme, Project Veritas has busted Raquel Rodriguez of Texas on video admitting to massive voter fraud. An admitted ‘ballot chaser’, Rodriguez is intimidating voters, changing their voters, and being paid reportedly $55,000 for 5,000 votes.

Attorney General Ken Paxton said in a release, “What’s shown in the video is shocking and should alarm all Texans who care about election integrity. We are aggressively investigating the serious allegations and potential crimes that Project Veritas’s documentary audio and video recordings shed light on today.”

James O’Keefe: “If Rodriguez is truly responsible for 7,000 votes delivered in Bexar County so far, it is a stunning example of how fragile our republic has become.”

“Raquel Rodriguez was recorded with hidden camera explaining how she and her confederates pressure and reward targeted voters in order to meet the vote totals campaigns and candidates have contracted them to meet,” said James O’Keefe, the founder and CEO of Project Veritas.

“Raquel Rodriguez boasts about all the other political power brokers who are in her pocket and she told our journalists she has already brought in 7,000 votes,” he said.

“If Rodriguez is truly responsible for 7,000 votes delivered in Bexar County so far, it is a stunning example of how fragile our republic has become,” O’Keefe said.

Rodriguez, a political operative who described herself as a ballot chaser, told Project Veritas undercover journalists, posing as potential clients, that one of her main jobs is helping Mauro Garza, the Republican House hopeful for Texas’ 20th District.

Garza, who owns San Antonio’s Pegasus nightclub, met with Rodriguez to discuss what she could do for him as he was launching his congressional campaign, she said.

I am lucky that I discovered this website , precisely the right info that I was searching for! . Vivyanne Lonnie Grissel

I pay a visit each day a few web sites and websites to read articles, however this webpage gives quality based writing.

If some one needs expert view regarding blogging then i advise him/her to
visit this blog, Keep up the pleasant work.

This piece of writing will help the internet people
for building up new website or even a weblog from start
to end.

Do you mind if I quote a few of your posts as long as I provide credit and sources back to your blog?

My website is in the exact same niche as yours and my visitors would
truly benefit from a lot of the information you present here.
Please let me know if this ok with you. Thanks!

First of all I want to say great blog! I had
a quick question in which I’d like to ask if you don’t mind.
I was curious to know how you center yourself and clear your thoughts
prior to writing. I have had difficulty clearing my thoughts
in getting my ideas out there. I do take pleasure in writing but it just seems like the first 10 to 15
minutes are generally lost just trying to figure
out how to begin. Any recommendations or hints?
Appreciate it!

Hello there, I found your web site by way of Google at
the same time as searching for a related subject, your site came up, it seems good.
I’ve bookmarked it in my google bookmarks.
Hello there, just became aware of your blog via Google, and found
that it’s truly informative. I am gonna be careful for brussels.
I’ll be grateful in the event you continue this in future. Lots of other people might be
benefited out of your writing. Cheers!

I have to thank you for the efforts you’ve put in writing this blog.
I’m hoping to check out the same high-grade blog posts by you later on as well.
In fact, your creative writing abilities has encouraged
me to get my own website now 😉

Hey I know this is off topic but I was wondering if you knew of any
widgets I could add to my blog that automatically tweet my newest twitter updates.

I’ve been looking for a plug-in like this for quite some time
and was hoping maybe you would have some experience with
something like this. Please let me know if you run into anything.

I truly enjoy reading your blog and I look forward to your new updates.

What’s up, its nice paragraph about media print,
we all be familiar with media is a enormous source of information.

Very shortly this website will be famous among all blog people, due to it’s nice articles or reviews

I delight in, lead to I found just what I was having a look for.
You’ve ended my 4 day long hunt! God Bless you man.
Have a nice day. Bye

Normally I do not learn article on blogs, but I wish to say that this write-up very forced me to check
out and do it! Your writing style has been amazed me.
Thank you, quite nice article.

I am really loving the theme/design of your website.
Do you ever run into any browser compatibility problems?
A couple of my blog audience have complained about my blog not working correctly in Explorer but
looks great in Firefox. Do you have any advice to help fix this problem?

I am curious to find out what blog platform you happen to be utilizing?
I’m experiencing some small security problems with my latest website and I would like to find something more safeguarded.

Do you have any solutions?

This article presents clear idea in favor of the new people of blogging, that actually how to do running a blog.

Hiya! I know this is kinda off topic however I’d figured I’d
ask. Would you be interested in exchanging links or maybe guest authoring a blog post or vice-versa?
My site discusses a lot of the same subjects as yours and I feel we could greatly benefit from each
other. If you might be interested feel free to send me an email.
I look forward to hearing from you! Superb blog by the way!

I feel this is among the such a lot vital information for me.
And i am glad reading your article. However want
to observation on few general things, The
web site style is wonderful, the articles is in reality
great : D. Excellent activity, cheers

At this time it sounds like WordPress is the top blogging
platform available right now. (from what I’ve read) Is that what you’re
using on your blog?

Great goods from you, man. I have understand your stuff previous to and
you’re just too fantastic. I really like what you’ve acquired
here, really like what you are stating and the way in which you
say it. You make it entertaining and you still care for to
keep it smart. I can not wait to read much more from you.

This is really a great web site.

What’s up everyone, it’s my first pay a quick visit at this website,
and post is in fact fruitful for me, keep up posting
these articles.

you’re actually a just right webmaster. The web site loading pace is
amazing. It kind of feels that you’re doing any unique trick.

Moreover, The contents are masterwork. you’ve done a great process in this
matter!

I am in fact thankful to the holder of this web page who
has shared this great paragraph at at this place.

I have read so many articles on the topic of the blogger lovers except this piece of
writing is actually a nice paragraph, keep it up.

Hello colleagues, how is everything, and what you wish for
to say concerning this paragraph, in my view its truly awesome in support of me.

I wonder how so much effort you set to make the sort of magnificent informative web site.

Hey There. I found your blog the usage of msn. That is a very
well written article. I’ll make sure to bookmark it
and return to read extra of your useful information. Thank you for
the post. I’ll certainly comeback.

Pretty nice post. I just stumbled upon your blog and wanted to
say that I have truly enjoyed surfing around your blog posts.
In any case I’ll be subscribing to your feed and I hope you
write again soon!

It’s perfect time to make some plans for the future and
it’s time to be happy. I’ve read this post and if I could I want to suggest you some interesting things
or suggestions. Perhaps you can write next articles referring to this article.
I want to read more things about it!

Interesting blog! Is your theme custom made or did you
download it from somewhere? A design like yours with
a few simple adjustements would really make my blog jump out.
Please let me know where you got your design. Thanks a lot

Good day! Would you mind if I share your blog with my facebook group?
There’s a lot of people that I think would really appreciate your content.
Please let me know. Many thanks

Hi there would you mind letting me know which web host you’re utilizing?
I’ve loaded your blog in 3 different internet browsers and I must
say this blog loads a lot faster then most.

Can you recommend a good web hosting provider at a reasonable price?
Thank you, I appreciate it!

You are so interesting! I do not think I’ve truly read through anything like this before.
So wonderful to discover another person with some genuine thoughts on this subject.

Seriously.. many thanks for starting this up. This site is
one thing that is required on the internet, someone with a
little originality!

Terrific post however , I was wondering if you could write
a litte more on this topic? I’d be very grateful if you could elaborate a little bit
more. Appreciate it!

0
call me a legend game hack

Everyone loves it whenever people come together and share views.
Great blog, continue the good work!

When I initially commented I clicked the “Notify me when new comments are added” checkbox and now each time a comment is added I get four e-mails
with the same comment. Is there any way you can remove me from that service?
Cheers!

There may be noticeably a bundle to find out about this. I assume you made sure nice factors in features also. Sigrid Herbie Litton

[url=http://cialispack.com/]can i purchase cialis over the counter[/url]