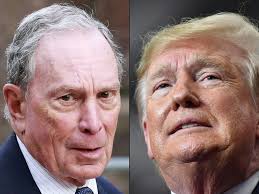 Trump’s 2020 campaign announced Monday that it would no longer allow reporters from Bloomberg News to obtain credentials to cover Trump campaign events.

“Bloomberg News has declared that they won’t investigate their boss or his Democrat competitors, many of whom are current holders of high office, but will continue critical reporting on President Trump,” Parscale continued. “Since they have declared their bias openly, the Trump campaign will no longer credential representatives of Bloomberg News for rallies or other campaign events.”

“This will remain the policy of the Trump campaign until Bloomberg News publicly rescinds its decision,” he said.

Thanks for a marvelous posting! I genuinely enjoyed reading it, you’re a
great author. I will be sure to bookmark your blog and definitely will come back in the future.
I want to encourage you to definitely continue your great work,
have a nice weekend!

0
where can you buy azithromycin over the counter

I really like your blog.. very nice colors & theme.
Did you design this website yourself or did you
hire someone to do it for you? Plz respond as I’m looking to create mmy own blog and would like
to know where u got this from. thank you

Thanks, Plenty of facts.